I LOVED The Little Mermaid, But The Sequel Was a Bit of a Letdown 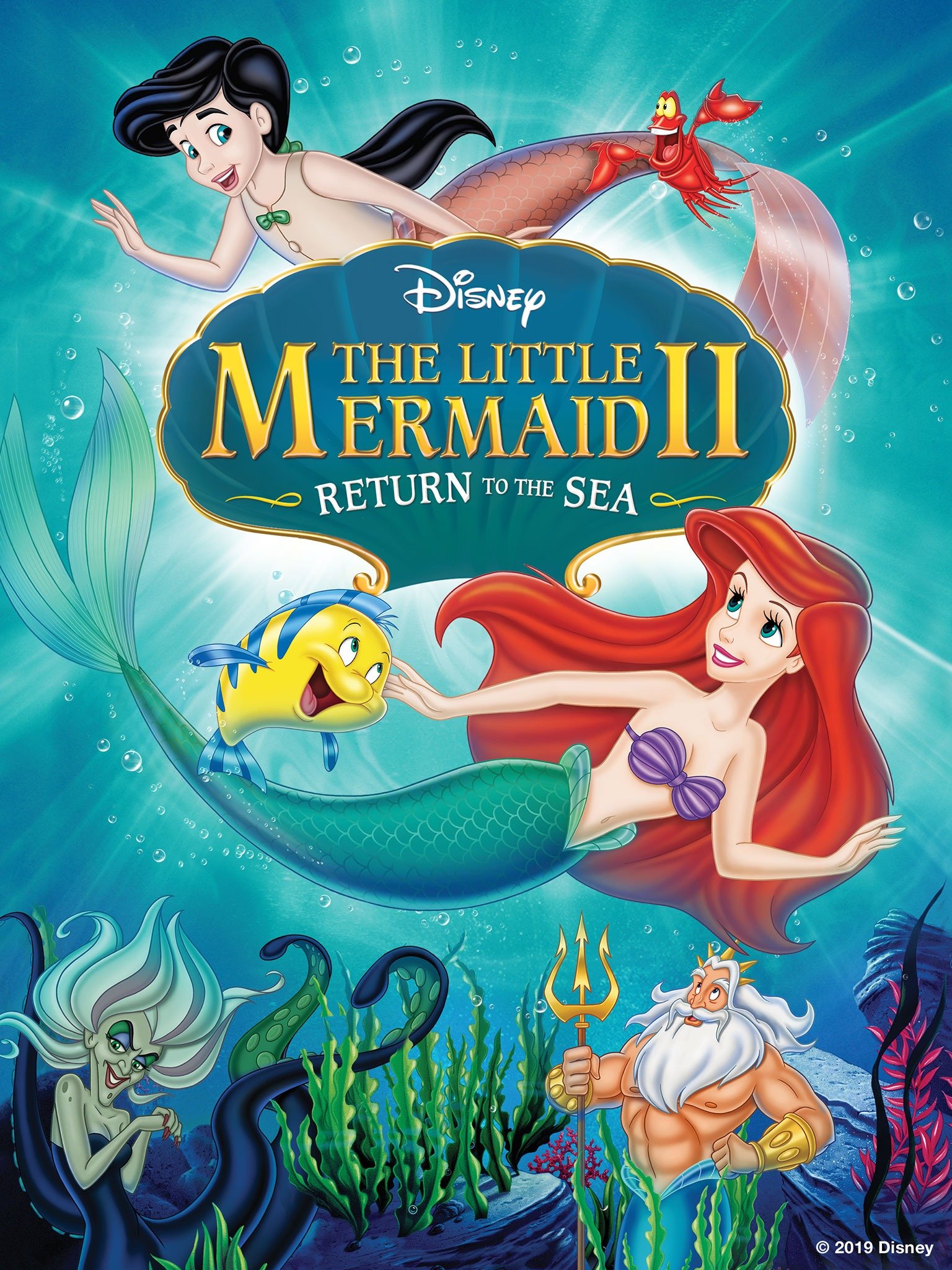 I am a HUGE FAN of The Little Mermaid, so when I heard there was a sequel years ago, I was ecstatic. However, I ended up having some mixed feelings about it after watching it the first time. Now that it’s on Disney+, I figured I’d watch it again. And this time I just had to write a review, you know, in case you were thinking of watching it too.

While it was lovely to jump back into the ocean along with all our favourite characters we know and love, there were also moments that were a little bit “Oh but why???”. Read on to find out why I thought so!

SPOILER ALERT – This review will go into detail about specific parts of the movie so if you haven’t watched it yet, don’t read it if you don’t want to know what happens!

The Little Mermaid II – Return To The Sea in my words

The Little Mermaid 2 – Return To The Sea picks up shortly where the first one left off. After Ariel marries Eric, they get to sharing new experiences, her wrapping her new human legs around his solid sailor’s body, I’m assuming, and using her newly-returned voice to keep the rest of the castle awake (Hey, just a thought, maybe I’d like to watch The Little Mermaid 1.5? Anyone with me?).

Then, because of a lack of proper education or helpful resources, this results in a child – a human child, Melody. By this, I mean this baby is born sans fins and noticeable gills (though, for a free-diving child, she certainly can hold her breath for obscene amounts of time!)

Since Ursula’s been shish-kebab-ed, her Mommy-issues-having, never-heard-of-before, jealous, always-in-her-shadow sister Morgana takes over the role of tentacled baddie (but actually it’s still Ursula because it’s the same voice actress!), with her own devious agenda (actually exactly the same, to use one of Triton’s descendants to bring about his undoing).

Melody is caught in between good and evil, and isn’t sure which is which, which sets everyone up for doom (surprise, surprise).

She has questions and she needs answers. Okay, fine. So instead of trying to talk to her parents about it, she rushes off into the ocean and WILLINGLY LETS a strange weirdo turn her into a mermaid at the very first suggestion.

Okay, okay, I know, you’re gonna say, “But Ariel did the exact same thing!” Yes, but Ariel was in love and wanted to be on land. Have you seen fish try and walk on land? Have you really now?

Meanwhile Melody was already happily free-diving and collecting trinkets from the ocean despite not being a mermaid (also despite her mother’s crazy belief that she should NOT go anywhere near the ocean because Morgana was a threat).

Okay, I’m sorry, I digress, but let’s go back and talk about that part right there.

Morgana is a threat, so Melody should never go near the ocean or even KNOW that she has a whole family under the sea? WHY???

Is it just me, or is this Elsa’s “Conceal, don’t feel” bad advice all over again?

Is it just a thing that Disney parents make bad decisions when it comes to their kids?

Should we even be watching this? What if they’re just, like, terrible role models??

Anyway, all this keeping Melody away only serves to push her to desire the ocean even more (DUH, could have told you that, Ariel, oh wait, wouldn’t you know that too since it was probably your father’s expressed forbidding of going to the surface that made it all the more enticing for you? Way to go to learn from your past…).

So Melody believes Morgana when she says that it’s her “destiny” to become a mermaid. Oh but then in order for the spell to stick, she has to steal the trident. (Cue a very unnecessary duo of sidekicks on her pretty easy-peasy adventure-quest.)

Meanwhile, Ariel has to become a mermaid again to find Melody (because nobody else knows the waters best, even though she’s never even stuck her tippy toes into the water in like 12 long years??) – complete with purple shell bikini top – and how can you not be jealous that she still looks like a 16-year-old??

So yada yada, she actually finds Melody and tries to stop her from handing the trident over to Morgana.

But Melody, OH BUT WHY Melody??, decides to give it to Morgana anyways, because Mommy’s been lying to her all her life, and she decides it’s “Too late, Mom.” (i.e. she kinda already has a clue that it’s gonna be bad, but wants to punish her mom for it anyways? A little bit too cutthroat for a 12-year-old, no? Just me?)

Blah blah, Morgana’s evilness is revealed and Melody goes, “You deceived me!” and then everyone scurries to… (I have no idea, it’s just chaos at this point).

Anyway, in the end it’s up to Melody to save the day, of course, which she does, you already know this will happen, so it’s definitely not a spoiler!

Okay, okay, from the way I’ve told the story, it doesn’t seem very appealing. I get it. I should probably also say that the attempts at musical numbers were… quite appalling. None of the songs on the soundtrack even came close to the hits we love (Under The Sea, Part Of Your World, Poor Unfortunate Souls). Not. Even. Close.

(Okay maybe For A Moment is alright. It’s a weird mother-daughter duet which frankly in my opinion would have been better without Ariel pining for her daughter. It was touching to see Melody finally feel like she belonged somewhere.)

So should you just forget about watching this straight-to-video sequel altogether?

Well, before you decide, let me just tell you about the three parts that were worth it for me.

1. The Little Mermaid is actually little

First of all, Melody is a child. She is 12-years-old, and there is no question of love. She doesn’t spend her time plucking petals of a sea flower, going “He loves me, he loves me not”. She doesn’t go gaga over being together with a boy albeit never actually having had a conversation with him. (Okay, I’ll stop here, there are many things wrong with the original The Little Mermaid and we shan’t go into it here! Yes, despite me being a huge fan!)

Melody is struggling with very relatable issues – not being able to fit in, awkward teenage years, trying to make friends when nobody else seems to share her hobbies, feeling like her parents don’t understand her… Unlike a mermaid falling for a human and having to have your fin sliced into two, it’s a lot easier to relate to Melody’s human problems.

2. Being unable to return to the sea

Although I think it was a drastic decision to hide everything about the ocean from Melody, it made me think about what Ariel had to go through, in order to do something right by her daughter (or so she thought). For twelve long years, she was unable to return to the sea. She couldn’t see her father or her sisters, she couldn’t be with Flounder, she didn’t even know that Sebastian was living under her roof.

Having to turn her back on everything she ever knew must have been hard. Even if she really loved being on the surface and everything in the human world, having to deny her entire family and home must have taken a toll on her. You can just see it in her face when she dips her toes into the water and imagines herself in it. HEARTBREAKING!!

It makes me think about the sacrifices we make as parents in our kids’ best interests. Many times, we don’t even know if it’s the right thing to do. We just feel it with every cell in our body and we just do it. Kudos to that.

And so, kudos to Ariel for making the sacrifices she had to for her daughter. That is a great leap forward from the rather self-absorbed teenager who wanted everything to go her way in the first film.

This is a line that Sebastian spouts at one point, and there are glimpses in the movie that really bring this home.

Melody is Ariel’s daughter through and through.

She’s equally headstrong, especially in opposing her parents’ rule which she finds ridiculous, is always one step ahead of royal babysitter Sebastian (poor thing never got a chance to have babies of his own!), and shares the same adventurous spirit, determination, oh and naivety when it comes to strangers promising to change your biological anatomy.

Melody gives her parents a hard time. Just like Ariel gave Triton a hard time. And it kinda felt like… karma?

I’m sure if you have teenagers you could surely commiserate. Since I don’t have teenagers yet… I can only imagine how bad it’s going to be… based on how I was as a teenager. Let it be a warning to those of us with toddlers and little ones who are still cute, wrap their hands around your neck and give you kisses.

It’s all going to change when they become teenagers. Be careful. They’ll want mer-fins.

Why Squid Game Wasted 485 Minutes of My Life