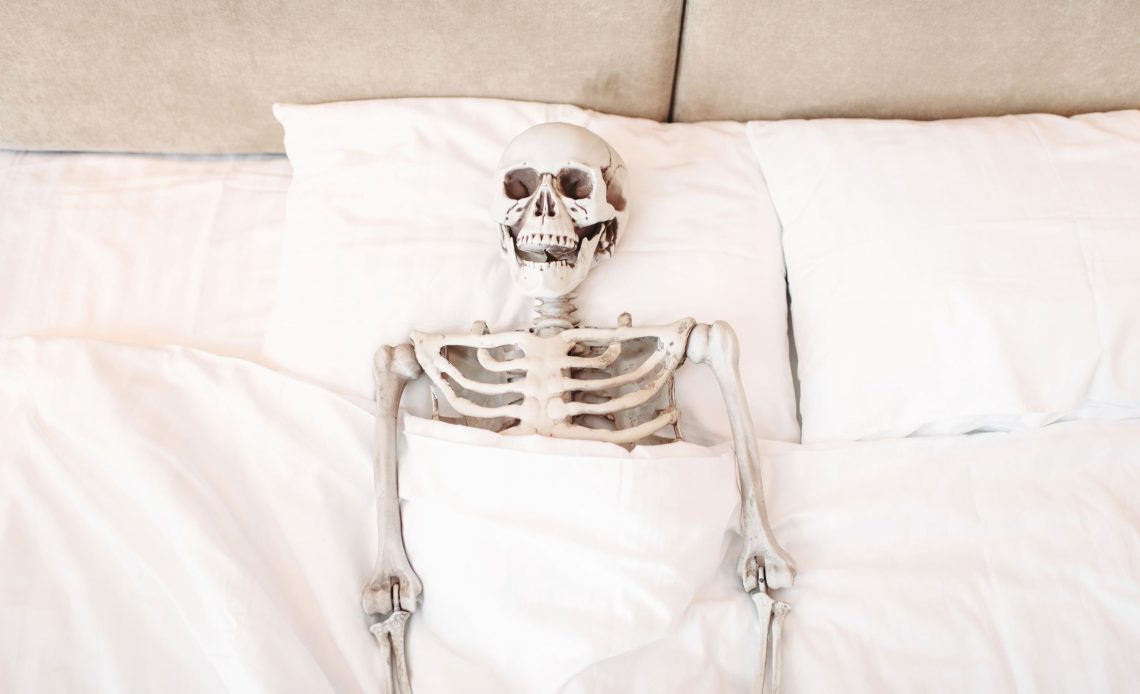 Background: I’ve been plagued by sleep problems for years now, and my husband finds that I stop breathing many times during the night, very often. He’s afraid I’ll die in my sleep, so I headed to the sleep clinic to try and figure out what’s wrong.

It was the date for my polysomnography – sleep study, or in Dutch, slaaponderzoek, meaning sleep investigation. I like that it’s called an investigation, because when my daily fatigue and exhaustion is such a mystery, an investigation is indeed what’s necessary to find the culprit – even if it’s just to rule out a suspect.

I checked in to Hotel Hospital in the late afternoon, and soon after I was being retrofitted with a device with nodes placed all over my body.

“I feel like a superhero,” I said, jokingly to the technician. In true evil villain fashion her response was, “Wait till I’m done with you, you won’t feel much like a superhero then.” Gee, thanks.

The nodes on my scalp were the worst, I think. I’m not sure what was applied but they had to be stuck on, and she literally said she was applying glue, which then needed to be blow dried to harden. The process took forever and I wasn’t allowed to use my phone even to scroll mindlessly through Facebook – she snatched it away from me and threw it onto a table out of my reach. “That’s not the point,” she warned. Fun times.

Before evil villain nurse would leave me alone she had to perform some tests, so I had to lie in the dark room and her nasty voice came over the intercom. She’d ask me to move certain parts of body when she asked, to check if the device was registering correctly.

Except… she’s asking in Dutch and I don’t necessary understand all anatomical terms in the language? Especially when she asked things like “move your *words I do not understand” (which now I assume is a Dutch way of saying pie trap, probably). I asked “Wablieft?” (sort of ‘Excuse me, what did you say?’) like three times and still didn’t get it until she said “move your mouth.” Like, why oh why would I understand such colloquial terms I’d never before heard in my life? So, suggestion, if you’re going to do a polysomnography, maybe do it in your own language? LOL

Waiting around for the sleep study to start

Finally evil villain nurse left me alone and thank goodness it was change of shift so I’d never have to see her ever again. I was left alone to have dinner (yuck, 4 slices of bread and butter, damn I should have brought food; I’d forgotten in Belgian culture “dinner” means bread, dinner means warm food in my household thankfully).

Also another suggestion – I thought I’d be able to walk around the hospital when I wasn’t connected and purchase snacks from the vending machines and such, but nope, I wasn’t allowed to leave my room. Thank goodness for Wifi.

I had a couple of hours to kill before it was time to sleep. I had to be “put to bed” between 11-11:30pm, otherwise I wouldn’t get enough sleep, not for the study to work, but for it to be counted under my health insurance.

It was a great time to finish up some work I had to do, so I churned out a couple of marketing emails for a client and then they came to set everything up, run tests again, and then it was lights out.

Not gonna lie, this night’s sleep was to be one of the worst I’d ever have in my life.

One of the worst sleeps of my life was when I was a teenager, camping on Sisters’ Island off Singapore with a bunch of friends, and being too warm to remain in the tent, I went outside to sleep on a picnic table, but it was wet so I tore up trash bags to place under me, and also to use as a blankie because then it was too cold. The crashing of the waves along the beach, instead of lulling me to sleep, kept me awake and alert the whole time, and the cold, although better than being too warm, kept me shivering and sad. Not a fond memory.

I can’t decide which night was worse.

I was awoken so many times that night during the sleep study, either to apply more gel to the tubes in my head, or to do tests, to ask me questions, or I had to call them over to unhook me so I could use the bathroom, or whatever! I don’t know why I had to be woken up so often – isn’t the point of a sleep study to study my SLEEP???

Plus, the device being strapped way too tightly around me (thanks evil villain nurse) made it really hard for me to sleep or turn. It was just suuuuuper uncomfortable. I’m not sure how you’re actually supposed to sleep “normally” when you have all this on you?

Then they woke me up WAY too early just because it was change of shift and they had to get me prepared for someone else who would come remove the nodes and wires across my legs. By then, a horrible migraine had set in and I was so much in pain and discomfort, but also a superb lack of sleep and rest.

I was forced to stay awake to have breakfast (yay more plain bread, gotta love Belgian culture), and I wasn’t allowed to sleep until it was time to take a nap. This was HARD, I tell ya. I hadn’t had enough sleep, I was so exhausted, and I was being forced to stay awake. If I was ever caught by enemies and they wanted to force information out of me, this would be how. It’s one of the worst feelings ever – I think up there with dysmenorrhea and giving birth.

I know, some of you will think I’m exaggerating, how bad can it be to be kept awake. It was excruciating for me, that’s all I can say.

The pain in my head was banging and throbbing. I had really wanted to get more work done but that wasn’t happening. The only thing that took my focus off the pain (and this has helped all throughout my life, thankfully) was to watch TV. Again, thank goodness for Wifi and Netflix. (So pack your laptop or tablet if you’re checking into a polysomnography!) By the way, I started watching Arrow. Late to the game, I know, but yay so glad to be watching it now (and Flash)!

I know, I had thought to myself, I get to nap 5 times today, life is so hard (jokingly). It’s no joke. It was hard.

I don’t know yet what the results are but I can honestly say it was all in all a horrible experience. Add to the fact that my husband was ill, so I basically checked myself in and felt super alone the whole time. Thank goodness I got to video chat with the baby boy the night before. I wouldn’t have been able to chat with anyone during that day of insanely painful naps.

By the time the fifth “nap” was over (I’m calling it a “nap” because it was in no way restorative nor helpful the way a nap should be!), I was close to being unable to function. The sleep depravation I experienced over this one night and day were worse than I had experienced as a parent of a newborn (my husband says I’m saying this because I’ve forgotten what that was like, but no, I’m pretty sure I’d take a newborn baby right now over this experience).

Still, I had to sit patiently while they took the nodes off me, and find my way home on tram and bus and walking in the dark. By the time I got home, I just wanted to crash and sleep FOREVER. And true enough, it took me 2 days to recover from the pain of the migraine (took a TON of painkillers, most of them didn’t work, not even ibuprofen and naproxen, which usually do the trick) and the sleep depravation.

I’m pretty sure that’s not how polysomnographies are supposed to go. And I can only chalk up my experience to bad luck. And right now, I can only HOPE that the sleep investigation shows up something negative so that it was not for naught and we can finally figure out a treatment strategy to help counteract my sleep problems.

And I hope to god that I never have to do a polysomnography again.

My First Visit to the Sleep Clinic

Why Am I So Damn Tired All The Time?

7 Ways To Boost Your Child's Immunity This Covid Season

Worth reading »
Why Am I So Damn Tired All The Time?