Why Am I So Damn Tired All The Time? 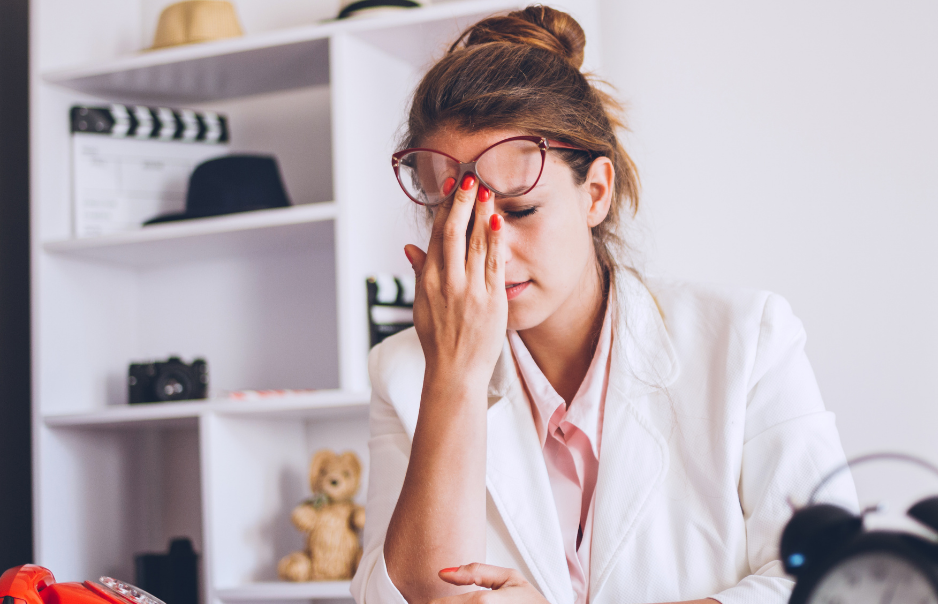 Fact: All moms are tired. We should all wear T-shirts that say “Tired Moms Club” on them. We should have a secret logo we scribble on walls around town, and whenever we see it, we nod in silence out of respect for a fellow mom’s exhaustion.

And it’s not just chores and caretaking we’re talking about; we’re collectively starting to realise it’s also due to the additional mental load moms carry around, which many non-moms (frustratingly) might not even realise exists.

But I’ve come to realise that I might be dealing with fatigue, even if it’s not mom related. And it’s definitely very real for me. It is the first thing I feel in the morning, it’s what I struggle with throughout the day, and it’s the last thing I’m battling in order to fall asleep.

WebMD says that “Fatigue is a lingering tiredness that is constant and limiting. With fatigue, you have unexplained, persistent, and relapsing exhaustion. It’s similar to how you feel when you have the flu.”

Medicinenet.com describes fatigue as “the lack of energy and motivation (both physical and mental). This is different than drowsiness, a term that describes the need to sleep.”

NHS.uk goes on to explain that fatigue is “when the tiredness is often overwhelming and isn’t relieved by sleep and rest.”

These explanations point out why fatigue is so different from just not getting enough sleep for a couple of days. It is an extreme exhaustion that goes way beyond just a lack of sleep. If you could remember the last time you had the flu and could hardly get out of bed, well, that’s how someone with fatigue feels like every. single. day. 😯

How to tell if you’re experiencing fatigue

Fatigue sucks because you can’t function right. That’s essentially what fatigue does to you. If you’re experiencing any of these things, you might be a victim of fatigue:

I can check all the boxes above if someone actually bothered to give me a survey to ask me if I was experiencing fatigue.

Problem is, people tend to either brush it off as “You need to go to bed earlier” or “You’re a mom, fatigue is part of the job description.”

This incredibly insightful article entitled “The Tired Mom Continuum: The Silent Fatigue of Motherhood” laments that “because fatigue is not a ‘medical problem’, there is no diagnosis. Instead, the existence and validation of the issue lie in the subjective experiences of those who experience it.”

Well, fatigue itself may not be a medical problem, but it definitely could be the symptom of one. Here are 5 possible reasons why we might be suffering from fatigue.

We know that depression causes extreme feelings of sadness and hopelessness. But did you know that fatigue is also a major symptom of clinical depression?

Depression can make you feel physically exhausted. It can make you incapable of good, restful sleep. It can make it difficult to concentrate on anything. It can shoot up the levels of cortisol, the stress hormone, in your body. It can play pranks on your metabolism; it can make you have to fight to get your energy back after expending it on a single task.

Sound familiar? So much of depression and fatigue are interwoven, you might not be able to see where one starts and the other begins. So if you’re experiencing fatigue and suspect you might also have lingering feelings of depression, make sure to talk to a professional about it.

They might be able to find some treatment options to help you not only with those feelings of depression but also to help with the fatigue.

That little butterfly shaped gland in our neck… I admit, I never knew what that tiny thing could do until it decided not to work for me.

I have Graves’ disease, which is an autoimmune disorder where my body attacks itself, and in particular, my thyroid decides to function abnormally. It produces too much thyroid hormones, causing hyperthyroidism, which then makes my body react in weird ways, like being constantly drained of energy, or experiencing breathlessness, or an increased heart rate.

A close cousin is Hashimoto’s, interestingly the complete opposite of Graves’, because it causes hypothyroidism, whereby your thyroid might become so super sluggish, it seriously brings down your metabolism rate.

Either way, such thyroid issues can seriously impact your energy levels and cause fatigue. And you might have more down days than good days even during the treatment period.

I remember a doctor asking me, “Didn’t you suspect something when you couldn’t chase after your son when he’s running?”

I said, “Nope, I just assumed I got huffy and puffy because I’m unfit.”

Like many, I just assumed I was tired because I was a mom, I didn’t exercise enough, I wasn’t getting enough sleep… So don’t be a me. Don’t assume. If you’re experiencing issues with fatigue and lack of energy, go get your thyroid levels checked just to be sure.

Again, this isn’t just about not getting enough sleep. WebMD classifies sleep disorders as “a group of conditions that disrupt or prevent restful, restorative sleep, (and) that can take a toll on your health and quality of life.”

Sleep apnea is one of the most common sleep disorders. Perhaps your partner has told you that you snore REALLY loudly in your sleep, or you might constantly wake up feeling completely exhausted the next day, like you ran a marathon in your dreams.

This could be due to sleep apnea, which causes low oxygen levels in your body, ie. your brain and your heart aren’t getting enough oxygen, and so you can’t function “normally”.

Sleep apnea also includes brief interruptions of breathing during sleep, where your upper airway actually collapses for 10 seconds or more, preventing your brain from going into deeper stages of sleep like the REM stage. This would explain why you don’t feel like you get restful sleep.

In this article on Prevention.com, Roseanne S. Barker, of the Barker Sleep Institute in Texas, says that someone with obstructive sleep apnea may stop breathing dozens or even hundreds of times a night.

My husband tells me that from time to time I stop breathing entirely as well. I just stop snoring, stop making noises, and just stop breathing. He worries sometimes that I might not start breathing again. I know I need to get this checked. I haven’t, but I really need to prioritise this.

Some other sleep disorders include insomnia, restless legs syndrome (RLS), REM sleep behaviour disorder, or even narcolepsy. Narcolepsy is where you feel extremely drowsy during the day and may fall asleep suddenly, no matter where you are or what you may be doing. This has happened to me once before while I was on my phone and I woke up only to realise I purchased something while falling asleep on my phone!

If you suspect that you might have a sleep disorder, go have it checked out. I should.

The mysterious pain that nobody can cure – that is what we know fibromyalgia to be. Fibromyalgia is chronic widespread pain, for no reason, all over the body, that is unbearable and doesn’t seem to go away.

But another symptom of fibromyalgia also includes severe fatigue throughout the day, unrestful and disrupted sleep, and living sort of in a “fibro fog” – a hazy feeling that makes it hard to concentrate.

I’m not sure if it’s because us women have to deal with a whole shitload of pain every month that we usually have a higher threshold of pain, but if you’re suffering pain that cannot be explained as well as immense fatigue, you might want to go ask your doctor if it could be fibromyalgia. Don’t suffer in silence.

Where all else fails, you might have chronic fatigue syndrome, also known as myalgic encephalomyelitis (ME/CFS). It’s a state of fatigue that lasts at least 6 months straight, affects your normal daily activities at home and at work, and can cause post-exertional malaise after you try to do anything that requires physical activity.

If you’re finding it harder and harder to do activities you usually could do without any issue, have extreme difficulty staying awake during the day, and feel completely broken after completing a task, you should go to your doctor to get tested for chronic fatigue syndrome.

Because there isn’t simply a diagnostic test you can take where two lines means “Congratulations, you have chronic fatigue syndrome!” your doctor will probably have to rule out all other conditions first.

Chronic fatigue syndrome usually begins for adults in their 30’s to 50’s, and women are 400% more likely to get this condition than men. So yes, moms, you might be at risk of CFS. If you’re not having any of the other issues listed in this article, perhaps this might be what’s up.

Fatigue is not something to be taken lightly, even if the people around you seem to treat it as a trivial matter. Fatigue can be debilitating and cause you to become unable to function normally. And no mom needs that kind of additional stress. We’ve already got our hands full!

So yes, while mom fatigue is a very real thing and should be given the consideration it deserves, sometimes you might actually be experiencing a medical issue that could be treated or at least helped in some way if you get it checked.

I hope that this article has helped share some insights into some possible issues that might be causing your fatigue. I know I definitely have things I need to get checked out!

Share your thoughts below, if you’re well familiar with any of the symptoms we’ve talked about! I’m always happy to discuss this issue with you, especially if the people in your life aren’t. We don’t have to go through this alone. I’ve got your back, mama!

My First Visit to the Sleep Clinic

7 Ways To Boost Your Child's Immunity This Covid Season